Synopsis: Why do we celebrate the fourth of July and what relevance does it have for us today? This article gives a short history of our forefather’s dependence on God and his purpose in giving us liberty.

In 1774 the British colonists who were living in America were engaged in a heated debate. You see, for the past 150 years they had lived their lives as they wanted but now England was controlling more and more of what they could and could not do.

In September of 1774 delegates from twelve of the thirteen colonies assembled in Philadelphia to discuss what they should do about this crisis. At the beginning of the very first meeting they invited Pastor Jacob Duche of the Reformed Church of Christ in Philadelphia to offer the invocation.

There is a picture of that event and in it we see that most of the delegates were on their knees as pastor Duche prayed to God that harmony and peace would be restored. (see prayer)  But the peace didn’t come and by the following spring the situation had gotten worse and delegates from all thirteen colonies met again as the Second Continental Congress to discuss what they should do about it.

Two months later, in June 1775, Congress passed a proclamation declaring a National Day of Humiliation, Fasting, and Prayer to be held on July 20, 1775, asking Americans to pray for God’s wisdom and guidance. (see proclamation) But a year later the situation had become almost intolerable and there were incidents of shooting skirmishes, so in March of 1776 Congress issued another proclamation calling for another National Day of Humiliation, Fasting, and Prayer. (see proclamation) But by this time the debate had pretty much resolved itself and it was generally agreed that the only course of action left to take was to declare America an independent country free from the rule of England.

Congress commissioned a young thirty-three year old delegate from Virginia by the name of Thomas Jefferson to write that declaration. When he had finished his task and presented it to congress he told them that he felt that God had inspired him in every word he wrote. Even so, the delegates went through his declaration word for word and made many numerous changes, but they were mostly cosmetic. They thought that maybe this word was a little to strong or that word could be said a little more diplomatically, but when the final draft was approved, it was pretty much as Jefferson had written it under what he said was divine inspiration.

On July 4, 1776 fifty-three of the fifty-six delegates signed that Declaration of Independence and they all knew that when King George read it he would consider it an act of treason. That meant, all of those who signed that document would be hunted down as criminals and, if caught, would be hanged for treason. That’s why, at the end of the Declaration of Independence, they wrote, “With a firm reliance on divine protection, we mutually pledge to one another our lives, our fortunes, and our sacred honor.”

It didn’t take long before England responded with a heavy show of force. Congress commissioned another delegate from Virginia by the name of George Washington to command the Continental army and his first task was to protect the harbor in New York. (The harbor in Boston was already controlled by the British.) But Washington and his men were no match for the British soldiers and they were easily over run and had to flee for their lives during the night.

Later, Congress ordered Washington to protect the harbors in Philadelphia, but again he was easily over run and again they had to flee for their lives. By the end of the year the war was not going well for the Americans and so, in December of 1776, just five months after they had signed the Declaration of Independence, Congress issued yet another proclamation, declaring another  National Day of Humiliation, Fasting, and Prayer. (see proclamation)

A year later, by the winter of 1777 General Washington had not won so much as a skirmish against the British army. Interestingly, back then armies didn’t fight in the winter time so the British soldiers were comfortably camped in homes they had confiscated in Philadelphia, New York, and Boston while Washington and his men were camped out in a snow covered field at Valley Forge, Pennsylvania.

Washington’s men were dispirited, distraught, disillusioned, and destitute. Most of the men no longer had any shoes and all of the men wore uniforms that were now nothing more than tattered rags. They also had very little food. As a result they were cold, hungry, and miserable. Worse yet, Congress had no money to provide them with clothing, food, shelter, or even ammunition or weapons.

All these men were volunteers and most of them were farmers who had left their fields and their families to come fight for freedom but now their future looked as bleak as the winter sky. Nearly every morning when Washington awoke he discovered two or three more men who had deserted during the night. They just snuck out of camp under the cover of darkness and returned home, feeling that it was no longer worth continuing to fight.

We’re all familiar with the picture of General Washington kneeling in the snow at Valley Forge next to his horse. That incident really did happen. We know because a soldier spotted Washington and told about it after the war. (see account) 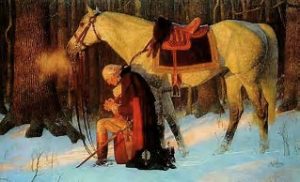 Washington plead with God for help and the Lord heard his prayers, as well as the prayers of the American people because on Christmas eve of that year, Washington crossed the frozen Delaware River and had his first victory over the British at Trenton, NJ. After that the war began to turn around until eventually the unimaginable happened – a rag-tag army of farmers defeated the greatest military power on earth at that time.

Less than a decade later, delegates from all the states met again in Philadelphia but this time it was to discuss forming a new government. But, as before, the debate became heated as the delegates vehemently argued over their differences. After two months of getting nowhere, Benjamin Franklin stood and reminded the delegates that during the Revolutionary War they had knelt in prayer in that very room every day pleading for divine help. He then counseled them that they needed the wisdom and inspiration of heaven if they were going to create a government that worked. (see speech)

In that same section he said that he redeemed the land through the shedding of blood. During the Revolutionary War, more then 25,000 men who, more than self their country loved, did not desert but gave their life on the battlefield so that their fellow countrymen could live in peace and in freedom.

Today, we are the stewards of that liberty which God has given us and for which millions of Americans have given their life over the last 240 years to preserve. This land is my land. This land is your land. From California to the New York islands; from the redwood forests to the Gulf stream waters, this land was made for you and for me.

It is now up to us, the living, to maintain the rights and protection of all people according to just and holy principles but the only way we can do that is the way our forefathers did, with humility, fasting and prayer, and with a firm reliance on divine providence.

This fourth of July, may we resolve to never shirk in our duty to God and to our country.

Related articles can be found at Constitutional Studies

This site is designed to provide a deeper understanding of the scriptures and inspire more thought about the gospel of Jesus Christ.